The Black Stars were held to a goalless draw by neighbours Ivory Coast at the Cape Coast stadium on Saturday.
The two West African giants offered fans in Ghana a good game as they canceled each other out in an entertaining game. 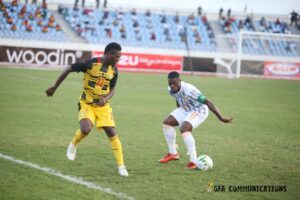 Ghana took the game to the visitors in the early stages of the game with the Ivorian side also responding well when the found their rhythm with some good inter-positional play causing a lot of problems for the Black Stars.
Christian Senghor got a glorious chance to score the opening goal of the match after he was set up by former West Ham striker Sebastian Haller but he missed the posts by inches from a good position. 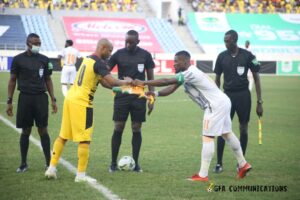 The second half started on a high tempo as both coaches brought on some fresh limps for the second period of the match.
AC Milan star Franck Kessie almost grabbed the winner but his deflected shot missed the cross bar by inches.
Manchester United youngster, Amad Diallo wowed fans when he came on and was a constant threat to the back line of the Black Stars.
The game was fairly balanced in the second half but lacked clear cut chances as both teams played with a lot of caution.
Five additional minutes after the ninety minutes could still produce a winner for the game as it ended goalless at the Cape Coast stadium.
Source: Starrfm.com.gh/103.5FM/Benjamin Yamoah