Days after Austria imposed a lockdown on the unvaccinated, it has announced a full national Covid-19 lockdown starting on Monday.

Chancellor Alexander Schallenberg said it would last a maximum of 20 days and there would be a legal requirement to get vaccinated from 1 February 2022.

He was responding to record cases numbers and one of the lowest vaccination levels in Western Europe.

Many other European countries are imposing restrictions as cases rise.

“We don’t want a fifth wave,” said Mr Schallenberg after meeting the governors of Austria’s nine provinces at a resort in western Austria.

For a long time, there had been a consensus over avoiding mandatory vaccinations, the chancellor said.

However, too many people had been incited not to get the jab, because of “too many political forces, flimsy vaccination opponents and fake news”, he added. The measures are yet to be finalised. 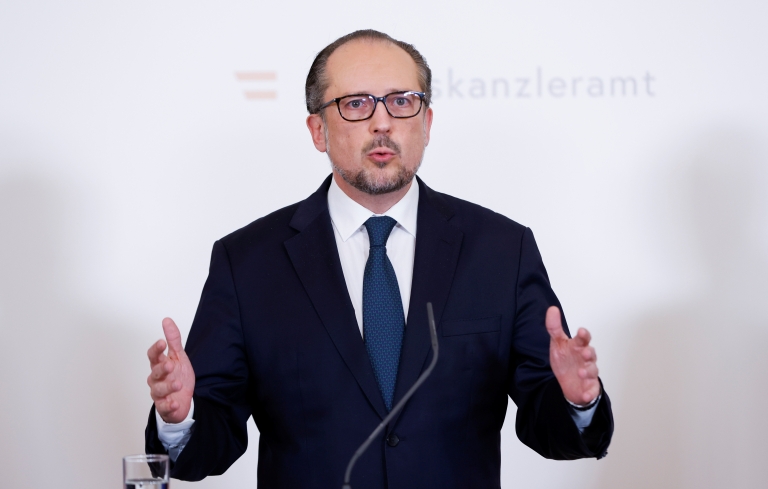 Latest figures show an incidence rate of 990.7 cases per 100,000 people in the past week, and Health Minister Wolfgang Mückstein said imposing a lockdown was a “last resort”.

Under the measures, Austrians will be asked to work from home, non-essential shops will close, and schools will remain open for children who require face-to-face learning. They will continue until 12 December, but will be reassessed after 10 days.

Slovak Prime Minister Eduard Heger announced that what he called a lockdown for the unvaccinated would start on Monday, and the Czech government is also limiting access to a variety of services. The Netherlands introduced a partial lockdown last weekend.

German leaders have agreed to introduce restrictions for unvaccinated people in areas with high Covid hospital admissions that would affect 12 of Germany’s 16 states.

Austria’s is the first full lockdown imposed by an EU country this winter.

The Europe regional director of the World Health Organization, Hans Kluge, has warned of a hard winter ahead. He blamed insufficient vaccination coverage along with “the easing of preventive measures and the spread of the more transmissible Delta variant”.