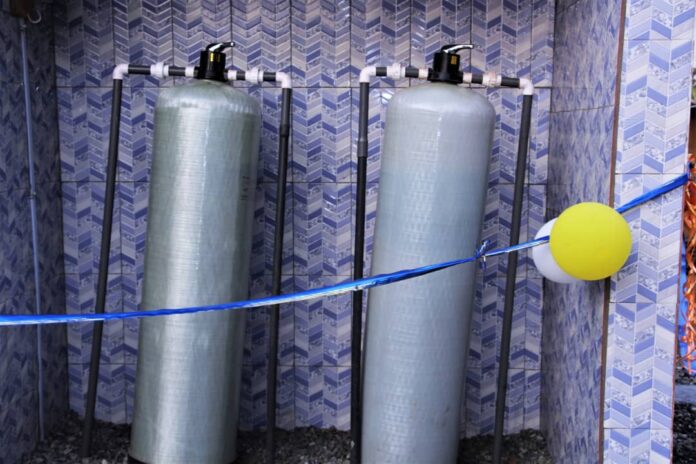 The Koforidua Area of The Church of Pentecost has commissioned a mechanized borehole with two iron removal filters and an overhead polytank storage facility at a total of Ghc38,844 for Akpo, a farming Community in the Yilo Krobo Municipality in Eastern region.

Akpo and surrounding communities such as Akpo Susie, Okper Terpursi ,Akpo Sla, Akpo Akuapem located on a hilly area near Huhunya have never had access to safe water.

The estimated population of over 2000 residents predominantly peasant farmers therefore depended on heavily polluted stream shared with animals for drinking and other domestic uses which resulted in waterborne diseases among the populace.

Few people including nurses and teachers posted to the community who are able to afford sachet water buy from Nkurakan township which is about 15km away to drink.

The water stress situation in Akpo community worsens every dry season as the only stream dries up.

School children and women in particular queue and wait hours for the stream to recharge to enable them fetch few buckets of water .

“in the dry season when you come here you will see queues .School children and women struggling to get water .Sometimes it results in a fight. The students get late to school . Residents also go to church late sometimes 11:am and 12 pm then they are coming to church all because of the water problem” Aartey Henry a resident said.

Attempts made in the past by organizations to drill boreholes in the community hit a snag due to difficult hydrological challenges.

The chronic water stress situation fueled alarming rural urban migration among the youth who would have hitherto stayed in the community to farm for a living.

Speaking at a brief ceremony to Commission the mechanized borehole facility, the Koforidua Area Head of The Church of Pentecost ,Apostle Samuel Osei Asante explained that ,the water stress situation of Akpo and its surrounding Communities came to the attention of the Area Executives of the Church through a report by then District Pastor for Huhunya Pastor Kofi Fofie.

Apostle S.O Asante said based on the report, the Church decided to construct a mechanized borehole for the community in line with vision 2023 of the Church which encourages Community impact projects.

He however said, the initial budget estimate for the project increased due to unexpected serious hydrological challenges encountered and even caused damage to the borehole drilling equipment.

According to Apostle S.O Asante, a total of Ghc26,644 was spent in putting up the mechanized borehole with overhead reservoir polytank.

However, hydrologist after testing the water quality, recommended the purchase of two iron removal filters were to filter the high iron content which the Church purchased increasing the cost to Ghc38,844.

Apostle S.O Asante stated that despite the expensive cost of the project, the Church is elated residents in Akpo Community and by extension its immediate surrounding communities now have access to potable water.

He stressed that the water facility has adequate groundwater capacity to serve the surrounding Communities also struggling to have access to safe water.

“We are yet to consult the hydrologists and the other technical men who worked on it again because the information we have received is that the water they hit is quite a lot and there is a possibility that they can develop it and extend out pipes to other places so that other communities around can have access to safe water .In fact what we heard was that many people have come and try to drill boreholes but they couldn’t hit water but by the grace of God we came here and we have been able to provide water for the people ” said Apostle S.O Asante.

The Koforidua Area Coordinator of Pentecost Social Services (PENTSOS), Pastor Seth Ofei Badu under whose supervision the project was executed expressed gratitude to God for manifesting His glory in making the mechanized borehole project a reality despite the challenges encountered.

He is hopeful the facility would have positive impact on the beneficiary communities especially on education, health and church attendance.

Dademankye of Akpo -Bunase Community Alfred Teye Hogah was so excited that he was lost for words when thanking The Church of Pentecost for the water facility.

He said, the intervention by the Church is divine therefore the Community has named the water project as “Onyame na ay3”, to wit, it is the doing of God.

He appealed to the Yilo Krobo Municipal Assembly to help lay pipes to the surrounding villages to also benefit from the mechanized borehole facility .

Some women in the community including a physically challenge recounted their terrible experience in the decades old struggle for safe water, therefore, excited for the provision of the mechanized borehole facility which would improve accessibility to safe water supply even during the dry season.

Present at the ceremony were Pastors and their spouses as well as chiefs ,Elders and Assembly Members in the beneficiary Communities.