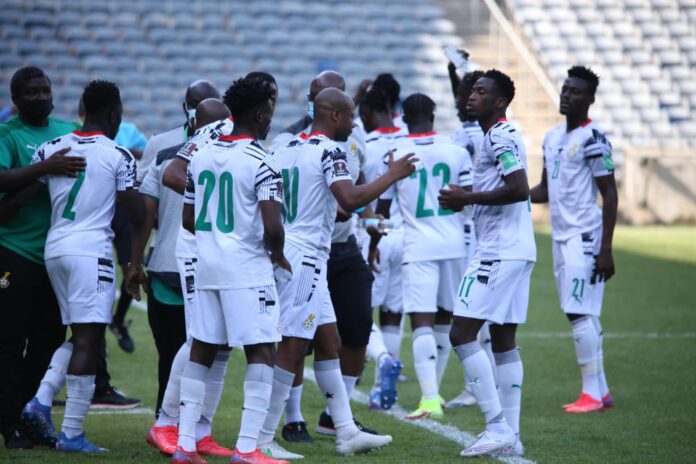 The Black Stars of Ghana have qualified for the 2022 World Cup after a draw with rivals Nigeria in Abuja.

A Thomas Partey goal in the 11th minute helped Ghana to a 1-1 draw after the Nigerians equalised with a penalty minutes later.

This means the Stars go through to their fourth World Cup in five attempts having missed out on Russia 2018.

Otto Addo’s men went into the second leg against Nigeria in Abuja needing to avoid defeat to give themselves a chance after a 0-0 stalemate in Ghana on Friday.

The visitors took the lead at the Moshood Abiola National Stadium on 10 minutes when Partey’s speculative shot from outside the penalty box squirmed under home goalkeeper Francis Uzoho, who should have made a comfortable save.

More fancied Nigeria equalised via a penalty as Denis Odoi clattered into Ademola Lookman in the box, and William Troost-Ekongâs thunderous spot-kick nestled in the top corner, but they could not find the winner they needed.

Nigeria had qualified for six of the previous seven World Cups dating back to the United States in 1994, and their absence from this yearâs tournament will spark an inquest from the countryâs football authorities.

But for Ghana, and their newly appointed technical advisor Chris Hughton, it is a major triumph in a qualification campaign in which they never really impressed and had looked a shadow of the side that reached the World Cup quarter-finals in 2010.

They defended for much of the 90 minutes in Abuja, rarely looking threatening after they scored, but also faced few alarms themselves from a Nigeria side devoid of attacking threat.

Nigeria thought they had a second when Victor Osimhen scored, but the VAR correctly ruled he was offside in the build-up.

Emmanuel Dennis headed wide for the home side in the second half and Osimhen sent a bicycle-kick past the post, but it was largely comfortable for Ghana in the closing stages as they held on to the dismay of most of the 60,000 supporters in Abuja.