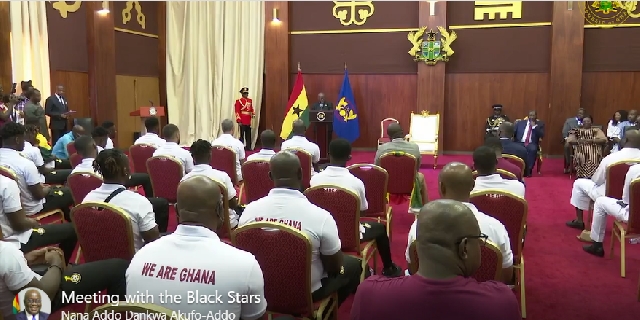 According to Akufo-Addo, the current technical team can take the team far in the Qatar World Cup later this year.

Addressing the Black Stars and their technical team and other officials of the GFA at the Jubilee House on Wednesday, 30 March 2022, the President said: “I’m hoping that the technical team that has been put together for these two matches will, at least, take us through the World Cup itself…”

He told the GFA President, Mr Okraku: “Whatever you can do to make sure that the technical team stays together, at least, until Qatar and after that, we can take the long term decisions…”

“We thank you, you’ve lifted the spirit of the nation and now we have every reason to look forward to your performance in Qatar…everybody is going to be behind you and we are going to give you all the maximum support that we can, the ministry, the officials of the GFA, and all the other organisations in the state that works with sports and football,” the President told the players.

The Black Stars secured a World Cup spot after a 1-1 draw with Nigeria in Abuja on Tuesday, 29 March 2022 after a goalless draw at the Baba Yara stadium.