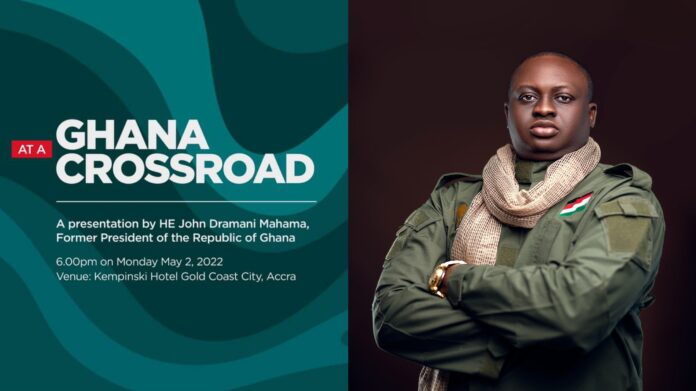 I came across a flyer of the nation’s builder, H.E. John Dramani Mahama captioned “Ghana at a Crossroad”. I was surprised and curious by such a thought-provoking caption and as a security expert I began to question people about it.

It appeared everyone had a different meaning to the caption. However, this just as several others proved how an intelligent communicator H.E. John Dramani Mahama is. The caption is not far from right considering the current situation the country finds itself in.

Ghana is at a Crossroad today because every fundamental indicator of the economy is on a brink of collapse and we (Ghanaians) must take a decision now to prevent the collapse of the nation. Every single sector in the country, from the economy to education, health, agriculture and security is in coma and struggling for life in an ICU.

On our economy, inflation has hit a record high of 19.4%. Our public debt has ballooned to almost 400 billion Ghana cedis which interprets as 85% percent of our debt to GDP ratio. Our Cedi is on a free fall with over 20% depreciation within two months; making it the worst in Africa and second worst in the World. Fuel prices have now broken the ten (10) while the much touted economic wizard, Dr Bawumia looks helpless with his economic management team currently in complete haywire.

Shamefully as a country led by a president who is a human rights lawyer and his vice who is an economist, an electronic transaction levy which has proven to be recessive and retrogressive in many African countries turns out to be the only fiscal policy solution to resurrect our dying economy. In the absolutely certain event this shambolic policy fails, a country like Ghana will have no alternative to put the economy on track.

On education: the FreeSHS policy after bad implementation is on it’s knees as senior high school students cannot be fed properly, parents are forced to pay dubious fees and students as young as 14 years are left to fend for themselves as day students in areas far from home are without parent’s supervision. Our university students cannot pay their fees and are being forced to defer their programmes. Basic education has completely collapsed with no provision of text books for three consecutive academic years.

Mismanagement and incompetence on the part of this government has rendered our trainee teachers with no option than to feed themselves. This is how bad the outlook of the countries situation currently is.

On agriculture: planting for food and jobs is threatened with lack of funds, fertilizer price is skyrocketing with supplier not being paid and looming issue of famine which is an issue of national security is not far from us as a country. Local food inflation is currently higher than imported foods. Local poultry production has collapsed due to high cost of feed and services. This sums and clearly predicts the dying state of our agriculture sector awaiting appropriate time for burial service.

Our health sector has not been left out of the woes. Every single sector in the health service is in debt. The NHIS policy has now become a White Elephant. This government has not been able to complete a single district hospital in anywhere across the country and cost of health service delivery is now unbearable.

The big question is, how did we get here? The government machinery keeps disrespecting citizens with COVID-19 and Russia-Ukraine impasse excuses meanwhile COVID-19 has given this government over 33 billion Ghana cedis.

An amount that has since not been accounted for. We have a finance minister who is always at his A game when cooking the fiscal books.

Other Ministers like the health minister, Kwaku Agyemang Manu have become untouchable with whatever illicit activity they find themselves in.

This is the situation we find ourselves in as a nation and it would not be alien when anyone says we are at a crossroad.
Concluding, I would not want to steal the golden seal out of the mouth of H.E. John Dramani Mahama. Ghanaians cannot wait to listen to him tomorrow at exactly 6 o’clock in the evening to ignite the hope that is almost lost in the citizenry