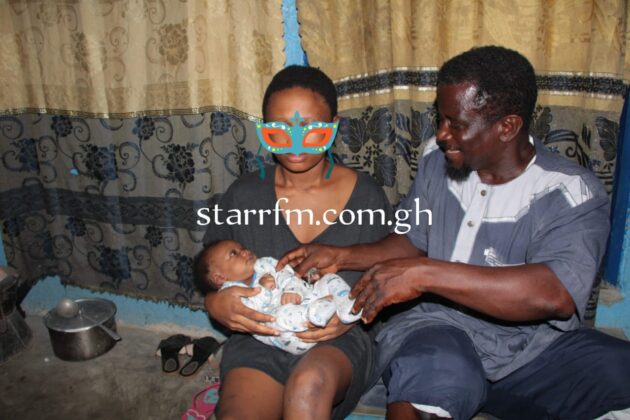 An Islamic Preacher Ibrahim Amevor who rescued a 20-year-old Nigerian girl trafficked to Koforidua in Eastern Regional for sexual exploitation is appealing to the Nigeria High Commission in Ghana to come to the aide of the victim and her month-old baby.

Amevor wants the victim and the child repatriated and reintegrated to their family in Nigeria.

The victim who is currently mentally unstable is unable to provide any detailed information about her family in Nigeria.

Due to her mental condition, she is locked in a room together with the baby to prevent her from escaping.

“I lock her and the baby in the room whenever I have to go out and because there is nobody in the house. She got missing for about three days. Apparently, she left the baby home and went as far as Akyem Tafo. She was brought back to Koforidua by someone, that is the reason why I lock her,” Amevor disclosed.

The victim is among many Nigerian girls trafficked to Koforidua for sexual exploitation.

The victim Somtooma (not her real name) was rescued by the good Samaritan Ibrahim Amevor on the streets of Koforidua and was provided medical care.

Amevor narrated that “It came to a point every evening whenever I’m going to town from 6:30 to 7:00pm, I saw this girl sitting at the traffic on a bench for two weeks wearing same dress so it kicked my heart to get closer to her. When I got close to her I started to interview her to find out what her problem was but I noticed she was pregnant.

“She told me she doesn’t have any place later she told me they were living in one house behind Normal technical. She told me she was hungry so I brought her home, and gave her food so she stayed with me for a while up to 9:30pm when I escorted her to go home. The following day I went to the house to look for her then they told me she is no more living there a week after. She called me around 9:30pm and said she was in town at total 2,” Amevor narrated.

He continued that, “At the time I met her she was six months to seven months Pregnant. I asked her where her antenatal card was she told me she doesn’t have. I sent her to the Alata chief but he was very sick so they directed me to Ebo chairman. I went there but he told me he can’t handle it so he gave me a number to call and see the representative of the Nigeria Ambassador in Eastern region. So I went to him I explained everything to him with the girl as well. He told me that I should go back he will see us later after discussing the matter in a meeting but he never showed up.”

On April 31,2022 , the victim gave birth through Cesarean delivery at the Eastern Regional Hospital but suffered severe puerperal psychosis.

“They admitted us almost one week at the hospital then they discharged us, even the medical bill was a problem but some benevolent people helped. After a week she started behaving strangely so I sent her back to the hospital, things are not easy what to eat even is very difficult. Social welfare couldn’t help us when we went to them.”

Ibrahim Amevor continued “I consulted one of my legal practitioner and she told me to report to the police so I reported and wrote my statement. She gave us her mother’s number to call her but when we called the mother in Nigeria the mother sounded as poor helpless woman. According to the girl, if you reach Lagos you will take another bus spend the night before you reach her home-town.

Meanwhile, the Eastern Regional Vice Chairman of Association of Nigerians, Christian Ofori has called on the Ghana Police Service to help arrest kingpins involved in trafficking young girls from Nigeria to Ghana for sexual exploitation

It comes after the Journalist with EIB -Newtork, Kojo Ansah uncovered serious sexual exploitation of trafficked Nigerian girls to Koforidua, Eastern Regional Capital of Ghana under the guise of coming to work in restaurants and shops in Ghana.

The victims are housed in two major brothels-Bula Spot and Little Ben located in the center of Koforidua.