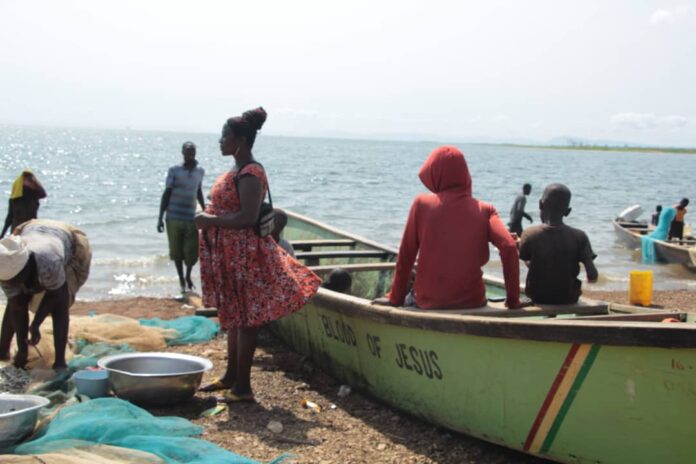 Fishing activities in Akateng, a fishing community in the Upper Manya Krobo in Eastern Region, are grinding to a halt due to a long shortage of premix fuel.

Many fishermen have parked their canoes while few have turned to buying petrol and mixing it with engine oil to power their canoes for fishing in other to survive.

The situation is seriously affecting the local economy.

Akateng, a vibrant fishing community with brisk business is becoming a pale shadow due to the long shortage of premix fuel.

Fishers have for the past four years been battling premix fuel shortage in the community as premix landing committees in charge of distribution have been reduced from eleven(11) to five (5) and with erratic supply.

The fishers say the situation is ruining their source of livelihood.

“We don’t have access to premix fuel, the long shortage is affecting our business so we are appealing to the government to ensure that there is a supply of premix fuel,” a fisher lamented.

Another fisher told Starr News “Now the fishes are in deep waters so we have ferry into the deep water to fish before we can have a good harvest but there is no premix for us. When the premix is in abundant nobody can hoard but because supply is erratic people are able to hoard and smuggle the same. During NDC time the distribution outlets were over 10 so we had regular supply but it’s now 5 even with that we are not receiving supply”

Happy Kortey, a fishmonger is unhappy about the development. She said the fishing business has been seriously affected hence appealing to the government to increase the distribution outlets with frequent supply.

Two weeks ago, the Member of Parliament for Upper Manya Krobo, Bismark Tetteh Nyarko raised the issue on the floor of Parliament which the Minister of Fisheries Hawa Koomson said the ministry is planning to install automated pumps for only fishers with cards to access the premix fuel to curb hoarding and smuggling.

However, speaking to Starr FM, the MP Bismark Tetteh Nyarko said the Minister seems disconnected from reality on the ground.

“The challenge we are facing here is the perennial shortage and hoarding of premix fuel.so if you turn around you can see some of the canoes lying down. They don’t have fuel to go fishing and because of that, it is having a very big toll on our economy in the district here.

“Because of that our women are unable to get fish to sell to make money for the family. The men are also sitting down idle because they don’t have premix fuel for fishing. So I wasn’t happy with the response of the Minister in Parliament. It seems he doesn’t know the reality on the ground”.

“Currently the way we’re are managing this is that those who can afford to have to go to Asesewa to buy the petrol itself then buy engine oil then come and mix it themselves, that is very expensive because that one has not been subsidized. Another challenge is when they are coming on the way the police will also arrest them that they are not supposed to buy petrol into gallons to mix.”

Meanwhile, the Ministry of Fisheries has announced that the closed fishing season for this year is expected to take effect from July 1st to August this year.